The Phandelver’s Pact was formed in the region that is now Phandalin and the Neverwinder Woods, on the Northern Sword Coast, when a long forgotten clan of Dwarves made an agreement with a group of Gnomes of unparalleled engineering skill to share ownership of a rich mine located in the Wave Echo Cave. The pact created a lot of wealth for the parties and the surrounding lands, drawing both admiration and envy. Later, a group of powerful Human wizards joined the agreement since the mine also contained strong magical energies and material, where a powerful new forge was crafted: the Forge of Spells.

The Forge of Spells was a great forge built by the humans, dwarves and gnomes of Phandlever’s Pact. The forge of spells was able to channel the magic of Wave Echo Cave to enchant weapons and armour. To protect the forge and its items, a strange many-eyed creature had been summoned and tested those who tried to use the Forge of Spells.

It appeared as a large workshop with a stone pedestal in the middel of the room, where a small brazier crackling with green flames danced.

Wave Echo Cave was a great cavern complex within the Sword Mountains and the location of the Forge of Spells. The cavern was known for its mineral wealth as well as its magical properties. Wave Echo Cave was connected to an underground hot spring that continuously boiled near the cavern. The cavern got its name from the booming sounds created every time the waves crashed against the cavern 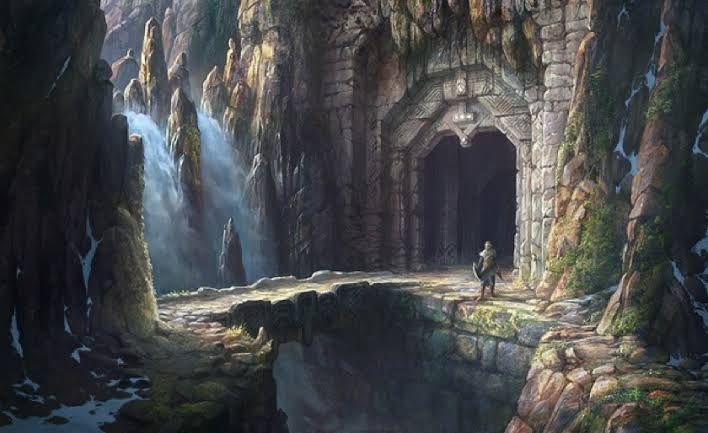 Disaster struck, however, as Orcs swept the North, laying waste to all in their path. Reinforced by evil mercenary wizards, the orcs battled through the mines to seize its treasure and riches. Human wizards fought bravely alongside their Dwarven and Gnomish allies to defend the Forge of Spells but to no avail. The ensuing battle was a grand one and much of the cavern was destroyed. Tremors and cave-ins meant heavy casualties and few, if any survived. Meanwhile, the original settlement of Phandalin was also wiped out by the Orcs and the mine was lost to the ages, as was all knowledge of the Phandelver Pact.