How to find Arkham.

Arkham is in the commonwealth of Massachusetts, not far from the Atlantic Ocean, athwart the banks of the Miskatonic rive, about 22 miles NNE of Boston, a little more than 12 miles south of Newburyport. Travellers reach it by car, bus, train, or small boat. Fare for the B&O commuter train from Boston is $2,20, and from Newburyport is $1,40. 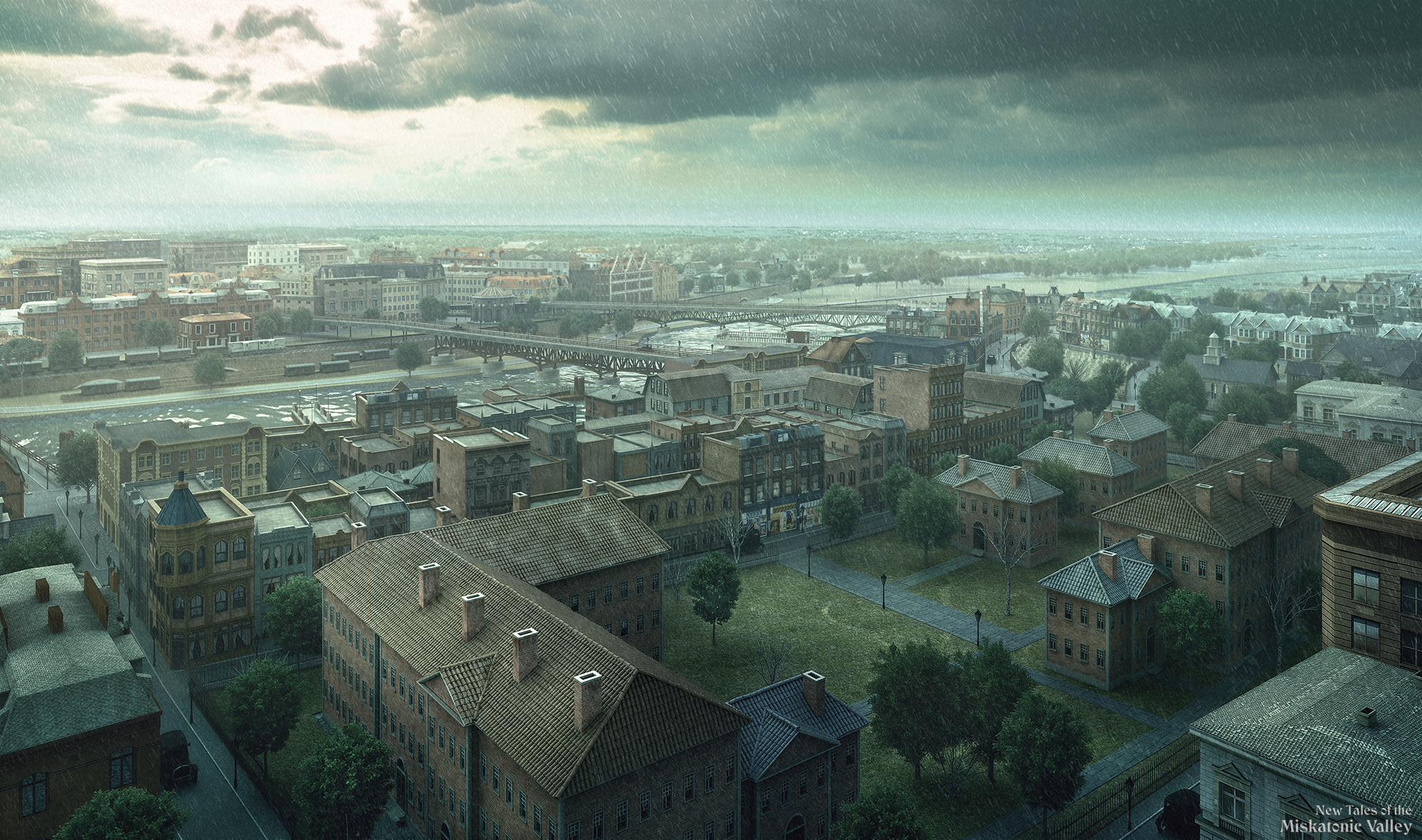 Arkham receives three or more inches of precipitation monthly throughout the year. Summer and fall thunderstorms are likely; occasionally a great hurricane swoops north. Winter storms can be severe.

Temperature varies more than rainfall, early October shows Arkham’s trees in full autumn colour. The hills become fabulous carpets of red, yellows, and golds. Temperature are brisk, with nighttime lows in the 40s and daytime highs in the 60s. By November, fallen leaves litter everywhere, and the trees are nearly bare.

Occasional light snow-showers occur as early as late November, but the snow rarely last, and Arkham rarely enjoys a white Christmas. January and February are cold, when low temperatures are normally 20°-30°F. Anything lower than 10°F is considered remarkable.

Winter thaws in March, but cool temperatures can last into early April. By the end of April, flowers begin to bloom and the trees begin to leaf.

May and June bring the first 70°F days, and July the first summer heat. In August when the onshore breezes fail, temperatures can soar to 90°F and more. The air hangs in the valley, humid and stagnant, creating uncomfortably sticky days and nights. These periods are usually short, however, and temperatures above 85°F are exceptional. In general, the evenings cool off considerably and, especially near the river, a light jacket might be considered. The Miskatonic is often cool for comfortable swimming, though hearty souls and young men showing off regularly make the plunge.

In September, the weather cools, and the first light frost may fall at the end of the month. This time is sunny and breezy, with scattered showers. Students return to school, leaves turn, and the cycle begins again.

Financial institutions generally are open to the public from 10:00 A.M. to 3:00 P.M, Monday-Friday. Governmental offices are open 8 A.M. to 5 P.M., but closed lunch-time. Most merchants are open from 8:00 A.M. to 5:00 P.M. Some especially hardware and department stores and lumberyards stay open for part or all of Saturday. Sunday closures are nearly absolute.

Commercial activity halts on Sunday. With certain exceptions, it is against the law (and the law will be enforced) to operate any business of any kind between the hours of 6:00 A.M. and 11:00: A.M. on the Sabbath. Then we hear the sound of money only in collection plates.

However, on Sunday, with the express permission of the selectmen, Western Union receives and delivers wires, but do not transmit them; the telephone exchange is open and operating, as is the B&M rail line and the local taxi service; restaurants, speakeasies, gift shops, or other luxurious enterprises, with a single exception never open on Sunday. Sunday dinner is family affairs, not commercial opportunities.

Arkham is the home of Miskatonic University, which figures prominently in many of Lovecraft’s works. The institution finances the expeditions in the novellas, At the Mountains of Madness (1936) and The Shadow Out of Time (1936). Walter Gilman, of “The Dreams in the Witch House” (1933), attends classes at the university. Other notable institutions in Arkham are the Arkham Historical Society and the Arkham Sanitarium. It is said in “Herbert West—Reanimator” that the town was devastated by a typhoid outbreak in 1905.