The vast reach of the landscape takes you by surprise as the two truck stops in the side of the road. Behind you the major dearie farm with fence and towers can only be seen with cyber eyes enhancement, but it’s there in all its mighty and corporate existence. In front of you in about 15 km, highway 90 crosses through the land as a giant snake taking traffic from one corner of Salish-Shidhe to the other.  The wind picks up and rain starts to fall in silent drops on your coat and rain turn into fog as it hit the hood of the trucks. Rook steps outside and walks to the back, where he finds some food, sodas and a few beers. “Lets eat Chummers” he says while handing out sandwiches to everyone. 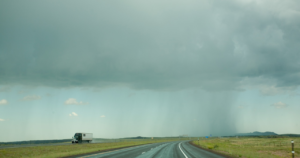 The rain drums on the hood of the two huge and old trucks. One of them has marks on each side and the trailer is all curled up, where the Trolls hit it. It looks like a bottle of cola, that you have squeezed between your hands, but the Trolls looks worse you imagine. That was one hell of a street fight and suddenly you feel very hungry as the adrenaline of combat finally has left your body. You answer to no one, so how does Red handle himself, when death comes knocking and he has a wife at home. Shit, you remind yourself to talk to him about that.

Few cars pass by, mostly trucks going to and from the farm, with either livestock or produced products. Few use the horn, but the majority just travels past you as you didn’t exist. As a sinless that exact metaphor just makes you feel lost and ignorant – but hey fuck the world right – every man for himself and I don’t owe nothing to anybody. The rain keeps falling in silence, your hands have markings from gunpowder and the fight. What am I doing here? What is my purpose? Stupid questions that needs to be locked away behind that door that should never be opened.

Rook asks Inferno for a quick word. Everybody seems like they don’t care, but you can see the tension settle and Red silently puts his food on the truck ready to draw blood if need to. I guess trust doesn’t come easy running the shadows, and that elf is just fucking scary. Did Inferno not mention Rook had awakened capabilities? Then what is the fucking deal with the black cyber-arm and pitch black cyber eyes? Looking past his arrogant demeanor – he is just scary looking and it makes you uneasy.

Brick quickly relaxes and brags about the sniper rifle show he presented back in Seattle.  Beast doesn’t really care it seems, but listens silently anyway. He has moved back into the truck, probably trying to get some silence and away from Brick, so he can eat his food and relax. Fuck that troll does not take a hint – if he were more stupid he would stop breathing I guess.

Inferno comes back and signals all to mount up. The road trip continues toward the south, towards Cascade mountains – towards the unknown Tir.